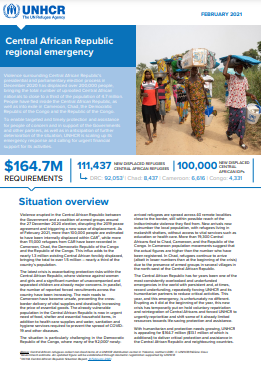 Violence erupted in the Central African Republic between the Government and a coalition of armed groups around the 27 December 2020 election, disrupting the 2019 peace agreement and triggering a new wave of displacement. As of February 2021, more than 100,000 people are estimated to have been internally displaced within CAR, while more than 111,000 refugees from CAR have been recorded in Cameroon, Chad, the Democratic Republic of the Congo and the Republic of the Congo. This influx adds to the nearly 1.3 million existing Central African forcibly displaced, bringing the total to over 1.5 million – nearly a third of the country’s population. With humanitarian and protection needs growing, UNHCR is appealing for $164.7 million ($13.1 million of which is additional) to deliver critical protection and assistance in the Central African Republic and neighbouring countries.