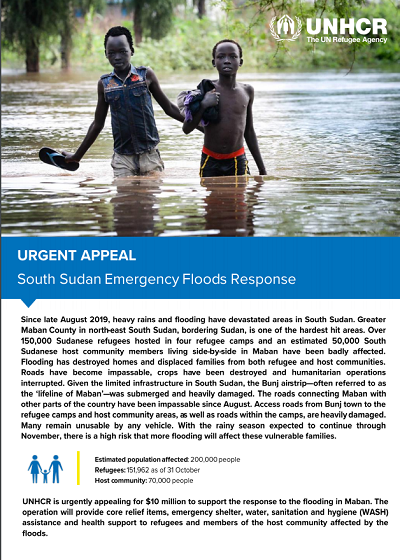 Since late August 2019, heavy rains and flooding have devastated areas in South Sudan. Greater Maban County in north-east South Sudan, bordering Sudan, is one of the hardest hit areas. Over 150,000 Sudanese refugees hosted in four refugee camps and an estimated 50,000 South Sudanese host community members living side-by-side in Maban have been badly affected. Flooding has destroyed homes and displaced families from both refugee and host communities. Roads have become impassable, crops have been destroyed and humanitarian operations interrupted. Given the limited infrastructure in South Sudan, the  Bunj airstrip-often referred  to  as the 'lifeline of Maban'-was submerged and heavily damaged. The roads connecting Maban with other parts of the country have been impassable since August. Access roads from Bunj town to the refugee camps and host community areas, as well as roads within the camps, are heavily damaged. Many remain unusable by any vehicle. With the rainy season expected to continue through November, there is a high risk that more flooding will affect these vulnerable families.