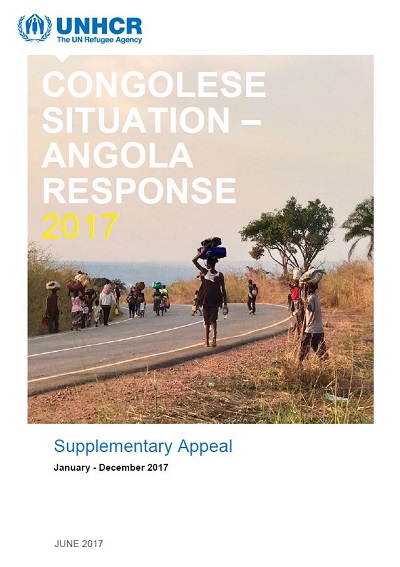 Read the entire Supplementary Appeal and access the Latest Updates on the Angola Response.

The escalating violence in the Kasai region of the Democratic Republic of the Congo (DRC) has internally displaced 1.3 million civilians inside the country. The rate of internal displacement due to the Kasai conflict is now estimated at an average of 8,000 people per day. Protection concerns and human rights violations have been reported, indicating a high risk that the situation could develop into a large-scale inter-community conflict. Most civilians in areas affected by the conflict are at risk of serious human rights violations, including physical mutilation, killing, sexual violence, arbitrary arrest, and detention in inhumane conditions.

The Angolan Government is keeping its borders open, allowing UNHCR unhindered access to formal and informal border crossing points. According to the Angolan Government, since April 2017 over 30,000 Congolese—mainly from the Kamako area of Kasai, and arriving into Lunda Norte Province in Northern Angola—have crossed the border in order to save their lives and to seek asylum. The daily rate of arrival ranges between 300 and 500 people a day. Besides the indiscriminate and brutal violence targeting civilians, the recently reported shortage of food in the Kamako area is forcing people to flee. UNHCR has so far pre-registered some 25,700 refugees of whom 75 per cent are women, children and elderly. UNHCR has also identified a number of unaccompanied and separated children, as well as older persons at risk and female-headed households, all requiring urgent protection interventions. The Angolan authorities continue to conduct screening at the border to establish the civilian nature of the new arrivals.

Congolese asylum-seekers are staying in Mussungue and Cacanda reception centres in Dundo, Lunda Norte. They have indicated that they do not have immediate plans to return to the DRC due to the insecurity in their areas of origin. The condition in the reception centres remains extremely poor and congested, making it difficult for humanitarian agencies to provide basic services. A new site has been identified, and its development and the relocation of refugees from the two existing reception centres are priorities.

UNHCR expects the influx to Angola will continue and that an estimated 50,000 people will likely seek refuge in 2017. The unforeseen influx has stretched the Office’s capacity to respond in Angola. The sudden and increased needs in 2017 for refugee protection and assistance are detailed in this supplementary appeal.