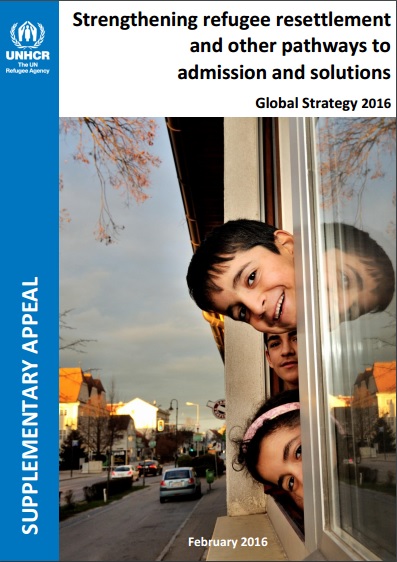 In order to scale up resettlement and solutions initiatives, UNHCR has established a supplementary budget totalling USD 39.2 million in additional requirements in 2016, including support costs.

There are almost 60 million forcibly displaced and stateless people in the world today - more than at any time since the Second World War. A significant proportion are refugees in need of protection and solutions. Voluntary return remains elusive for the majority and refugee-hosting states are struggling to cope.

One manifestation of this global challenge is the unprecedented number of refugees and migrants arriving in mixed flows in Europe during 2015, sparking a surge of political and public interest in the refugee and migration issue. Mixed movements to North America and in the Asia-Pacific have also been witnessed.

UNHCR and partners are working to support host countries, but there is an urgent need to increase international solidarity in the pursuit of durable solutions through resettlement or other forms of admission.

Many States have responded to show solidarity. A number of countries have announced significant additional spaces through resettlement and other humanitarian pathways specifically for Syrian refugees. Increases in global resettlement quotas are also expected, with a focus on Africa. This elevated level of interest in resettlement and other forms of admission for refugees requires UNHCR to substantially increase its capacity to respond and provide referrals, advice and support to States seeking to provide protection and solutions to refugees. Given both the protection and political imperatives to maintain the institution of asylum and to share responsibility for today’s massive international protection needs, this scale up is a critical expression of solidarity and hope.

Thus far, UNHCR has responded by intensifying case processing to meet increased targets with existing resources. The comprehensive strengthening of capacity as set out in this Appeal is required immediately to ensure that existing commitments continue to be met at scale.

Going forward, it is hoped that States will continue to create and expand pathways for admission for refugees. The High Level Conference on Global Responsibility Sharing for Syrian refugees on 30 March 2016 will encourage and seek to expand commitments further. UNHCR will again review its approaches and resource needs in mid-2016 to ensure it has the capacity to respond.